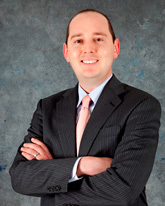 “Since joining ScottHulse five years ago, Francisco has demonstrated his strong commitment to our clients and the Borderplex community,” said ScottHulse Chairman David Bernard. “Our firm has sustained its 125-year heritage of leadership and service through the recruitment and advancement of talented attorneys like Francisco. We’re delighted that Francisco is committed to building his career at ScottHulse, where he can continue to contribute to making El Paso – his hometown – a better place to live and work.”

An El Paso native, Mr. Ortega is a graduate of the Greater El Paso Chamber of Commerce Leadership El Paso, Class 34. He serves on the board of directors of AVANCE and the El Paso Marathon Foundation. He also serves on the Ethics Review Commission for the City of El Paso. Mr. Ortega is a graduate of the University of Texas at El Paso and the University of Wisconsin School of Law.

ScottHulse is a full-service law firm with offices in El Paso and Las Cruces. ScottHulse attorneys have represented individuals and major participants in the commercial and industrial sectors of the El Paso, Juarez, and Las Cruces Borderplex since 1889. Today, ScottHulse attorneys are involved in client and community initiatives that are transforming the Borderplex into the most dynamic commercial center in the Southwest and the epicenter of U.S./Mexico trade.